the story of a poem awarded in italy

Posted on January 6, 2012 by Constantin Severin

My poem ”Improvisations on armonic key. In Memoriam Igor Stravinsky” , wrote in 1994, has now a special biography, full of strange significant coincidences…

The catalyst to write this poem was a dream, followed by a long series of magic happenings. One night, in autumn 1994, I had an unexpected dream with the Russian composer, Igor Stravinsky, the first major innovator in music of the XXth century, though I had only a vague knowledge of him. But from that moment I began very interesed by his bio and works and I found a book at the Library of Bucovina, ”Stravinsky”, by Roman Vlad. The author, Stravinsky’s friend, was also from my region, Bucovina, born in Czernowitz city, now a famous composer in Italy, the former artistic director of Scala from Milan. After some weeks I have met in my home-city, Suceava, the Romanian composer, Viorel Munteanu (now, the rector of the Arts Academy ”George Enescu” in Iassy) , Vlad’s friend (he dedicated a book to Roman Vlad), born in Bucovina, too, who became my friend …

In the same period I had the privilege to meet in Suceava, too, the well-known Italian poet, Manrico Murzi, the disciple of Salvatore Quasimodo, one of my favourite poets as a teenager, who graduated L’Istituto Tecnico Economico Statale “Antonio Maria Jaci”. Manrico Murzi also became one of my best friends.

Some days ago I received by mail the medal and the diploma signed by Prof. Claudio Sergio Stazzone, the president of L’Istituto Tecnico Economico Statale “Antonio Maria Jaci” in Messina and the honorary president of the jury of the 2nd International Poetry Competition ”Messina Città d’Arte ”. I won the second prize, joint winner with the poet Silviya Petkova, from Bulgaria. The first prize was awarded to the Greek poet, Kostas Zacharopoulos. Many thanks to all the members of the jury, especially to those who judged the Foreign section of the contest: Dott. Benito Corrao, Dott.ssa Giovanna Logiudice, Dott.ssa Celestina Martino. Dott.ssa Giovanna Logiudice wrote and translated into English an impressive justification/reason to explain why the English version of my poem ”Improvisations on armonic key”, made by Prof. Dan Nicolae Popescu, won the prize, and I think this short text to describe it is itself a moving poem:

A series of symbolic paths, both an imaginary and a real land, where the traces of the past are mixed with the materialism of the contemporary age, draw and develop a scenery of light and dark moments like in a music drama, then they catch a stream of words expressed by a narrative voice which goes deep inside a complex sensitivity.

This international poetry contest is part of the Biennial of Painting, Sculpture, Photography and Poetry ”Messina Città d’Arte ”, and was founded by the visual artist and writer Biagio Cardia, the president of the Associazione Turismo Arte Spettacolo in Messina, the city of famous artist Antonello da Messina.

My poem awarded in Italy have been published, some weeks ago, on the site of an amazing project, Best Poems Encyclopedia, made by poetry lovers from East Tennessee State University, USA, and you may find it among the Best inspirational poems, 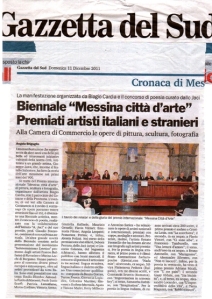 Constantin Severin (constantinseverin.ro) is a Romanian writer and, as a visual artist, the founder and promoter of the award-winning concept known as archetypal expressionism. He is the author of eight books of poetry, essays, and novels, and his poems have been published by major Romanian and international literary magazines. He is one of the editors of the French cultural magazine Levure littéraire.
View all posts by Constantin Severin →
This entry was posted in Literature and tagged best poems encyclopedia, biagio cardia, claudio stazzone, constantin severin, east tennessee state university, igor stravinsky, improvisations on armonic key, manrico murzi, messina citta d'arte international poetry contest, roman vlad, viorel munteanu. Bookmark the permalink.