Posted on September 7, 2012 by Constantin Severin 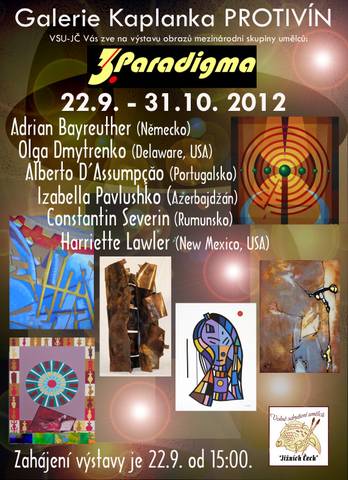 will be marked by a major group show in Kaplanka Museum, Protivin, Bohemia, Czech Republic, between 22 September-31 October 2012.

One of my best artworks, Text and Time 82, will be displayed on this group exhibition organized by the well-known German artist Adrian Bayreuther, founder of 3rd Paradigm International Artists Group in September 2009, and the Czech artist Josef Balek, who sent me the below informations about Kaplanka Museum and Art Gallery.

The building known in Protivín as the “Kaplanka”, or the Rectory (No. 37), was built as a hospital next to the early Baroque church of St. Elizabeth of Portugal. The Kaplanka together with the church form a single architectural composition, both built in the same period. The Kaplanka was established by Maxmiliana Veronica Švihovská of Riesenberg and Sswihow as a hospital for the needy in the late 17th century. It maintained its function throughout the rule of the Schwarzenberg family. In 1935, Prince Johann of Schwarzenberg donated the building to the municipality with the stipulation that the town would continue to use it to benefit the poor. After World War II, the building was converted into apartments which gradually ceased to meet modern living standards.

The decision to prepare the building for reconstruction was made in 2006, and the project was set into motion three years later. Work finished in October of 2009 at a total cost of CZK 10 million, of which CZK 8,924,427 came from the Southwest Regional Operational Program.

The reconstruction of the building revealed two black kitchens, a stucco decorated ceiling in today’s information centre, and a hidden stone portal that led to the former connecting corridor between the hospital and church of St. Elizabeth of Portugal. These elements were restored during the reconstruction, leading to an unexpectedly richer atmosphere inside the building. The second storey holds the original attic from the 17th century which is certainly worth a visit. Other points of interest include the relatively well-preserved beam ceilings in four of the rooms on the visitor’s viewing route.

In the courtyard of the building there is an interesting (and historically protected) “stone bench”, while the adjacent walls of the adjoining church display the original sun dial. The coat of arms of Count Jiří Vratislav of Mitrovice and his wife Maxmiliana Veronica Švihovská of Riesenberg and Sswihow on the facade above the main gate have also been restored.

The Kaplanka was ceremoniously opened on 8th May, 2010. Part of the gallery includes a permanent exhibition of selected works by the painter and graphic artist Jiří Kolář (1914-2002), originally from Protivín. Jiří Kolář was one of the most influential personalities of post-war Czechoslovakian culture. He is renowned for his poetry, written mostly in the 1940’s and 1950’s, and for his visual works. His collages are internationally renowned.

Another area of the Kaplanka features the Zoological Museum with its exhibit of exotic animal skeletons. The star of the exhibition is a rhinoceros. Visitors here are generally surprised to find that the museum holds the most extensive collection of rhinoceros skeletons in the world. There is also a giraffe skeleton, a pigmy hippopotamus skeleton, and other interesting osteological specimens.

You can also see seven Czech castles and the Eiffel Tower in the Kaplanka. All these monuments have been miniaturised into stick buildings on a 1:125 scale. The very patient creator of all the wooden structures here is a native of the nearby village of Myšenec, Ladislav Novák. The newest addition to the collection is Lednice Castle, made of 2,300 sticks and 27 tubes of glue. The castle took Ladislav Novák 1 year and 4 months to make.

Constantin Severin (constantinseverin.ro) is a Romanian writer and, as a visual artist, the founder and promoter of the award-winning concept known as archetypal expressionism. He is the author of eight books of poetry, essays, and novels, and his poems have been published by major Romanian and international literary magazines. He is one of the editors of the French cultural magazine Levure littéraire.
View all posts by Constantin Severin →
This entry was posted in Art and tagged 3rd Paradigm International Artists Group, adrian bayreuther, alberto d'assumpcao, constantin severin, harriette lawler, izabella pavlushko, Josef Balek, Kaplanka Museum, olga dmytrenko, Protivin. Bookmark the permalink.