Posted on June 6, 2013 by Constantin Severin 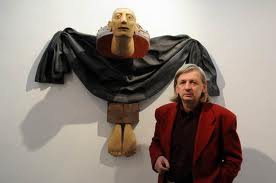 The leader of 80s generation on the current Romanian art scene is a sculptor, Mircea Roman. In fact, paradoxically, although the sculpture gained notoriety in Romania much later, the first important and larger generation coming into being at late nineteenth century, the Romanian sculptors from the last century (Constantin Brancusi, Dimitrie Paciurea, George Apostu, Paul Neagu , Ovidiu Maitec, Doru Covrig, etc.) have surpassed their fellow painters, both in terms of value and of international notoriety. All the mentioned artists, and we may add without hesitation Mircea Roman, would deserve to enter the consciousness of the art community as artists of universal value, but unfortunately, for reasons related to the operation of the global art market, this chance is offered only to Constantin Brancusi, a landmark of the Romanian genius. 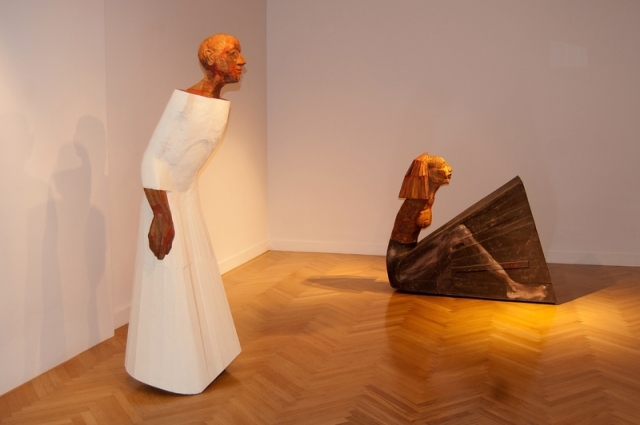 Mircea Roman is a very lucid and thoughtful artist, empathetic and involved, an artist of the inner lacerations, aware of the critical sitution of contemporary art and society. Mastering with authority a language of essences, expressive, dramatic, concise and well accompanied, he manages to transform each artwork of wood, metal and color, into a true reminder of his time, a perpetual portrait / self-portrait of chimeras that haunts the soul and spirit of actual human being.

He is an Expressionist artist, very interested by the binary structure of the human being, corpus and anima, especially by the fusion between them-the winged body, the body with the memory of Paradise. ”I made sculpture with body and soul. Soul must differ from the body” wrote in one of his statements. The soul soaked by memory, thought, reverie and faith is a real challenge for his art. That’s why he tries to describe and reveal the soul, to capture its inner movements with the help of a transfigured, hieratic and expressive body and face. His fantastic metamorphoses of the body transformed into temples or even sewers, the face replaced by a hollow or a window facing the unknown, his ”characters on the wall”, selfportraits, walking pyramids and the huge installation ”Dezorient Express”, sometimes painted red, are dramatic and expressive, of a restrained tragism, oriented towards the inside and timelessness. Roman is a master of modular sculpture, of serialism and most of his artworks imagine a symphony game between whole and part, with unexpected changes of motifs and volumetric proportions. 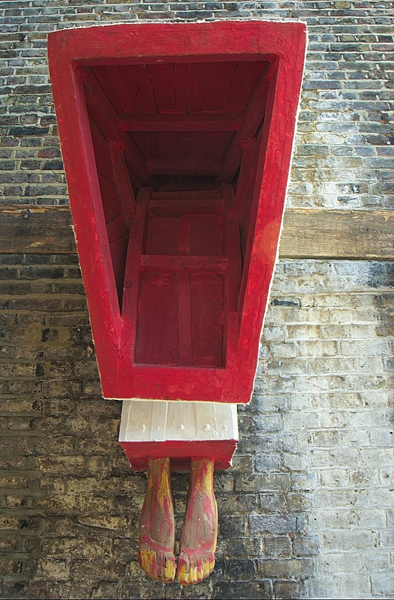 Mircea Roman’s Art (” the creator of the archetypal character”, Corneliu Antim) reconciles Paciurea’s archetypes, full of anxiety and tension, from Chimeras cycle, with the serenity and timeless archetypes of Brancusi. It’s an expressionist cry in a desacralized and dehumanized world, dominated by massive existential anxiety, a ”sick and misinformed world ”, as the artist himself asserted. 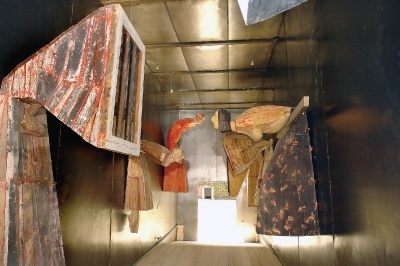 Constantin Severin (constantinseverin.ro) is a Romanian writer and, as a visual artist, the founder and promoter of the award-winning concept known as archetypal expressionism. He is the author of eight books of poetry, essays, and novels, and his poems have been published by major Romanian and international literary magazines. He is one of the editors of the French cultural magazine Levure littéraire.
View all posts by Constantin Severin →
This entry was posted in Art and tagged constantin brancusi, corneliu antim, dezorient express, dimitrie paciurea, doru covrig, george apostu, mircea roman, ovidiu maitec, paul neagu. Bookmark the permalink.