Posted on November 27, 2016 by Constantin Severin 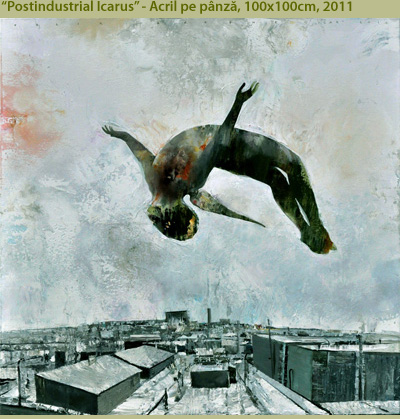 A major visual artist and thinker of the post-literary age

One of the few thought-challenging new Romanian artists, Felix Aftene had the inner power and the tools to become a landmark of the Romanian art in the last 15 years. In my opinion, if his works will be discovered by major global art dealers and art collectors, he could become as famous as his generation fellow, Adrian Ghenie.
An amazing visual Scribe of the post-industrial era, Aftene (a very complex artist, creator of paintings, sculptures, installations, video-art and performances) tries to link myths to the actual condition of the human being, the ‘’trophy-man’’of our stuffed-society, wandering in the center of the emptiness, a non-space deprived by the electricity of feelings and moral issues. A world in a decomposition state, a hyperreality which becomes step by step a kind of cybernetic game, but with the germs of rebirth and hope inside it, imbued with invisible angels, old archetypes, sacred hieroglyfs and Icaruses. The young artist is very cultivated, capable to re-write the art history through an autobiographical approach, with vivid and actual socio-political allusions, probably inspired by thinkers like Jean Baudrillard.
Aftene’s hieratic compositions, with pale, even spectral colours fitted to the apocalyptic atmosphere of our times, are situated between the figurative and the archetypal paradigms.
Felix Aftene (winner of the National Prize of the Romanian Fine Artists Union, in 2016) is both a major visual artist and a cutting-edge thinker of the postmodern/post-literary age. 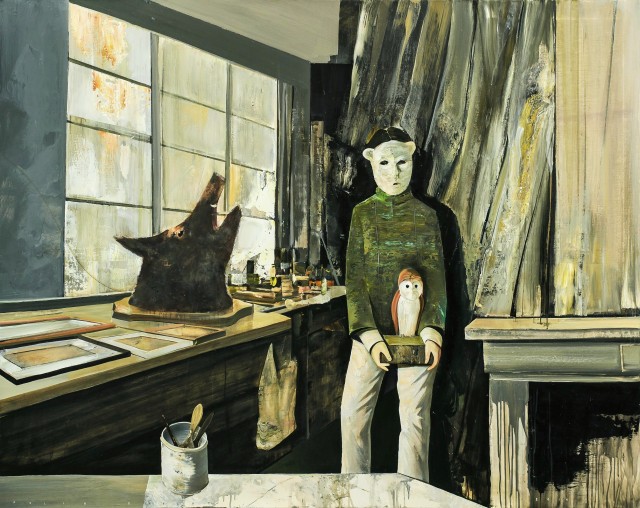 Memory and the power of the image

Felix Aftene is a complex artist, who often trespasses over the border between
the language of the visual and another – of the paths between the
performance/video and painting, between painting and sculpture… -, “translating”
motifs reasons, elements of the artistic deed from one to another. In the exhibition
Memory of the Image, at the Brancovian Palaces, Mogoşoaia (2015), one of the
methodological particularities was constituted by the transfer of iconography from
the performance and video towards painting, a type of looking into the abyss of the
postmodern image, which is reintroduced by the author into the process of creation
at the time he was working on Taxidermia (Taxidermy), the exhibition which had a
great success and delighted the public in 2014, at the Museum of Art in Iaşi. Thus,
the phrase “post-performance painting” appeared and was used by the artist
regarding the works on canvases from 2011-2014 time period, inspired by actions
held during the Periferic Festival in Iaşi, the editions from the late ‘90s, or newer
ones – “Water, Air, Fire, Earth” (video performance, 2010), “Taxidermy” (video
performance 2014).

The performance entitled “Hieroglyphics” (1998), showing a series of poses
of the body, reiterated principles from the history of art – of sculpture – from
Antiquity, Renaissance, Modernity. In some way, we are presented with
postmodern quotes “spoken” visually, at the first person. Felix Aftene has
transformed into self-portraits these incursions into his imaginary museum, adding
from the history of contemporary art: he painted, for example, a self-referencing
version of a portrait starting from a well known photograph which illustrates an
action of Joseph Beuys. And yet, the assuming of postures to which we make reference does not diminish the “covering power” of the program of ideas pertaining to this stage of
creation of Felix Aftene, and what we are offered is an analysis of the current
human condition, corroborated with a sometimes deep view on the
postindustrial urbanism. The redistribution of accents, from old history, myth,
surrealism, magical realism, towards our time is not categorical – the fantastic
insinuates itself in a series of scenes, maybe it would be appropriate for us to talk
about a new style of metaphysical painting. Reality is visited through the means of
the metaphor.

On the other hand, the pattering of this image is made and interpreted with the
help of photo-realism’s visual tools, filtered and interpreted. The texture of the
painted surface, enriched or “eroded” seems, sometimes, to sympathize with the
“Ghenie effects”, and other times the main cold chromatics turn this new version of
the new figurative into the abstract.
Going back to the painting entitled “Underneath the Emptiness”, 2014,
which sends us to Beuys’ action from 1965 “How to Explain Pictures to a Dead
Hare”, it could bring a touch to the semantics of the whole “Taxidermia” cycle. If
we associate this work with Felix Aftene’s video-performance from 2014, which I
already mentioned, with the paintings that echo it, we end up on a certain path
(introducing us under the sign of a symbolic thinking) with the idea that under the
crust of the taxidermy there is not only the emptiness, lifelessness, but also the
virtual chance to recover life. 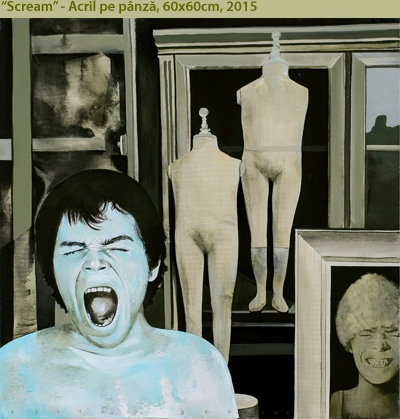 The Romanian artist states: “Taxidermy, the access to eternity through the
conservation of corpses, becomes the analogue to the veritable victory over time:
genetic survival”. In the action of the German artist, the hare was a symbol of life,
of fertility. On the other hand, maternity, just as the paternal affection, appears
explicitly in the embedded paintings of “Taxidermia” series of our visual artist. I
should add, in the end, another term of convergence: Beuys, in his action, had his
face covered in honey and gold leaf, materials which suggest the regeneration
of life and the spiritual light. Felix Aftene in the Natural Science Museum had his
body and face painted in white, the colour of light and purity: he walked from one
glass case to another, researching with his gaze the stuffed animals, as if seeking for
the hidden meanings of existence and the key to their activation… 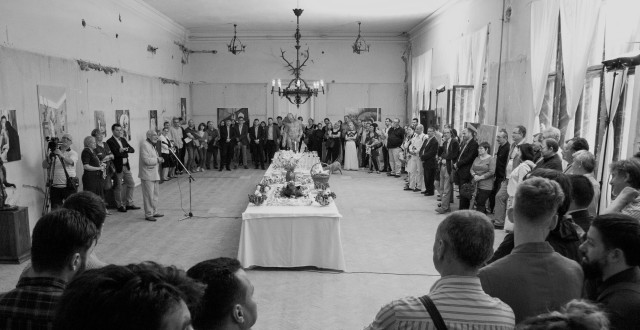 The opening of ”Taxidermia” solo show 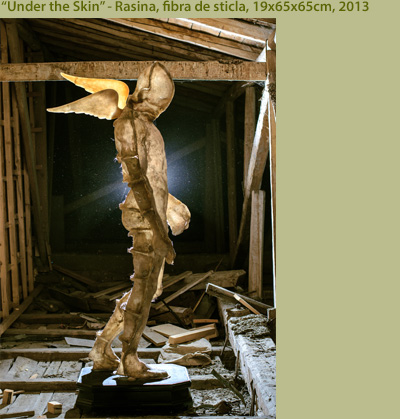 Born in Vaslui in 1972, but living and working in Iaşi, Felix Aftene graduated in 1996 the
Academy of Visual Arts “George Enescu” Iaşi, Mural Painting Department, professor Dimitrie Gavrilean, as head of the class.
Since 2016, he had a Ph.D. at the Faculty of Visual Arts and Design, Iaşi, coordinator professor Jeno Bartos Ph.D.
He is working as a designer since 1998, at the Romanian Television in Iaşi.
Between 1997-1998, the artist was granted the Scholarship of the Artists Union of Romania. In 1998, he won the contest for the execution of a mural painting for the General Directorate of Public Finances in Iaşi for the artwork entitled “Babylon” (on a surface of 74 sqm).
In 2008, Felix Aftene returned to public attention with an authentic work of art, “Time Capsule”, a monument made of bronze, placed in front of Iaşi City Hall, on the anniversary of 600 years since the documentary attestation of the city.
Starting with 1997, he is a member of the Artists Union of Romania and, beginning with 2005, he is a member of the Managerial staff. In 2013 he was elected president of the Artist Union, Iaşi branch.
He is also curator and coordinator of numerous artistic projects representing, in the country and abroad, the visual artists from Iaşi.
He was awarded and received over twenty-five prizes for his national and international artistic activity.
Felix Aftene is one of the most representative contemporary artists in Romania. His works are found in museums and private collections in Romania and abroad: United States, United Kingdom, Germany, Switzerland, France, Italy, Spain, Denmark, Canada, Hungary, Israel, Moldavian Republic etc.

Constantin Severin (constantinseverin.ro) is a Romanian writer and, as a visual artist, the founder and promoter of the award-winning concept known as archetypal expressionism. He is the author of eight books of poetry, essays, and novels, and his poems have been published by major Romanian and international literary magazines. He is one of the editors of the French cultural magazine Levure littéraire.
View all posts by Constantin Severin →
This entry was posted in Art and tagged adrian ghenie, Adrian Guta, constantin severin, Felix Aftene, Hyperreality, Jean Baudrillard, Taxidermy. Bookmark the permalink.