Posted on September 1, 2016 by Constantin Severin 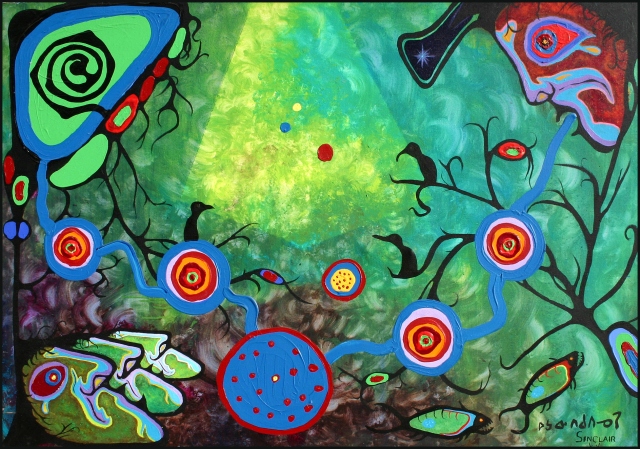 In my opinion, the great Canadian artist Norval Morrisseau is a classic of the archetypal expressionism, the new awarded art concept/movement with so many fans worldwide.
Now I have the great pleasure to feature on my blog Norval Morrisseau’s best follower, Ritchie Sinclair, a true Stardreamer on the contemporary art scene, looking for love in a Gods Country, and to include the story of their common painting, ”Sounding”.

The Story of Sounding
by Ritchie Sinclair

This painting was created by Norval Morrisseau and myself in September 1979 and signed by both of us before it was given away as a gift in December 1979. It is an example of the exploratory nature of “Thunderbird School Art”. On multiple occasions members of Toronto’s Eckankar community specifically utilized this painting as a vehicle to focus their sounding of the Hu at meditation gatherings held in Vandorf, Ontario.
Sounding didn’t begin as a joint project. Even though Norval kept me busy assisting him with his projects I also made time to create my own paintings, and I had intended this to be one of them. I first created the background of the artwork using a lift-off wash technique. With tape and a second wash I then created the central pyramid. In this rudimentary form the painting was first utilized in meditations that were conducted by Eck initiates; people who Norval held in high esteem because of their standing within the Eck community. Norval dreamed of one day meeting the living Eck master and hoped that he too would become an Eck initiate of some degree however those he sought counsel with informed him that his smoking habit was preventing him from evolving within the Eck community. This, however, did not deter him from daily study of the Eckist teachings and decades later, as a non-smoker, he would finally be initiated into Eckankar.
Sounding had been hanging on the mantle above a fireplace in an oversized room that opened up to two more oversized rooms on the main floor where the meditations had been taking place. Eventually I painted the figure of a head in the top right corner and the series of heads in the bottom left corner, and then left it.
One day I woke up to Norval sitting in a chair beside my bed, drinking coffee, and staring at something. I followed his gaze. At the end of my bed I spied my painting. It now had a big red dot in the middle of it. I was shocked. I never dreamed that anyone would touch one of my paintings in such a manner. Certainly no one ever had before. I wasn’t happy; I was upset and let him know it. He laughed. It didn’t seem to bother him at all and I soon got over my foolishness. Later that day, using his finger, he painted a yellow dot in the center of it, and later still; a blue dot. Over the coming weeks Norval kept the painting in the kitchen where he liked to sit and putter with it. I never touched it again except to sign it on the day we gave it away.
I grew to love the painting and what Norval had done with it, and openly wondered what would become of it. Artwork done in tandem was not a saleable commodity and paintings hanging around Norval never lasted long for one reason or another. We planned to spend Christmas with my family so I suggested that to keep it around we might give the painting away as a gift to my youngest brother, Keith; so we did. It has been with Keith ever since.
Interpretive Symbolism
I entitled the painting, “Sounding” after both its symbolic subject matter and its initial utilization as a seed for focusing the HU group meditation. The figure in the top left corner is an image of “Stardreamer”, which is the spirit name Norval gave me on the day we met. The nose and cheek are formed by a stylized bird, symbolizing the freedom of the sky (i.e. air). Out of the figure’s mouth emerges a sound which creates the path ahead. The light blue colouring the path represents the breath of life. To the bottom left are Easter Island-like figures symbolizing Morrisseau as shamanic mentor standing with the ancestors that came before him. The nose and cheeks of these figures are formed by a stylized moose head, symbolic of a grounded nature (i.e. earth). The top left corner spiral symbolizes the way through, down, and out of physical life. The yellow dot, blue dot and red dot in the central area lead one’s eye into the central pyramid of spiritual life, where souls travel up into the finer planes of existence. The three central birds represent beings deep in meditation. In juxtaposition to the top left corner’s unifying spiral at the end of one’s path of life (i.e. physical death) are two fish swimming in the bottom right corner that are symbolic of the dualities of Norval’s astrological sign, Pisces. It is interesting to note, however, that these fish swim free of one another, unlike the two fish tied together as depicted in traditional Pisces symbols.
Sounding is a highly symbolic painting. Each colour, line and form adds more detail to the tale told. Morrisseau paintings are usually two-dimensional renderings of symbolic subject matter however Sounding uses two dimensional forms to explore not only the 3rd dimension but to point the way to other dimensions
I have been avidly exploring the arts, primarily painting, all of my life. My artistic effort is both my personal approach to Spirit and ideally a source of inspiration to others. The theme of my art is love. 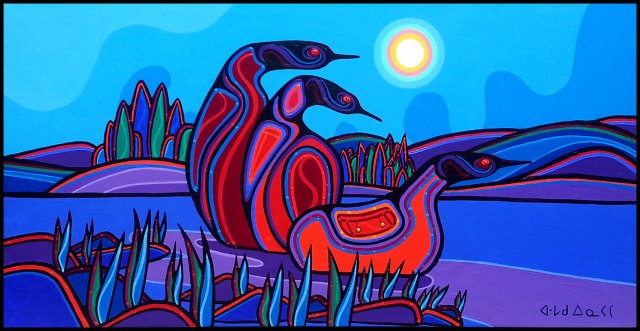 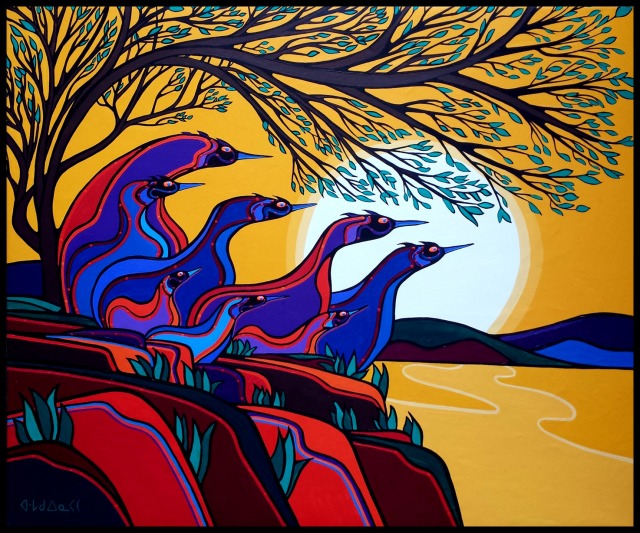 I have been avidly exploring the arts, primarily painting, all of my life. My artistic effort is both my personal approach to Spirit and ideally a source of inspiration to others. The theme of my art is love.

The Visionary Art and Artistry of Ritchie Sinclair and Brona Wingell

Constantin Severin (constantinseverin.ro) is a Romanian writer and, as a visual artist, the founder and promoter of the award-winning concept known as archetypal expressionism. He is the author of eight books of poetry, essays, and novels, and his poems have been published by major Romanian and international literary magazines. He is one of the editors of the French cultural magazine Levure littéraire.
View all posts by Constantin Severin →
This entry was posted in Uncategorized and tagged archetypal expressionism, Canadian art, Norval Morrisseau, Ritchie Sinclair, Stardreamer. Bookmark the permalink.